Going on holiday, moving furniture, taking rubbish to the tip. There are many occasions when it would be handy to have a larger or more specialised vehicle. 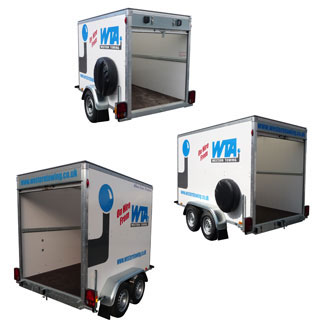 Enclosed with easy loading height, rear roller shutter door, the wheels on the outboard so allows for maximum inside capacity and trailer stability. All are braked, the smallest is a single axle.

The van trailer is a favourite for those who are looking to transport goods around whilst keeping them safe, secure and out of the elements.

Van trailers offer a cost-effective way of transporting all types of goods. Anything from tools, furniture and appliances to bikes, luggage and machinery. The possibilities are endless!

Unbraked
6ft 6in x 4ft trailer with mesh sides and ramptail, ideal for grounds maintenance including transporting machinery, quad bikes and any goods up to 480kg. Suitable for taking to Tip/Recycling Centre as trailer is under 3mtrs in total length.

Braked
These versatile, robust, fixed sided trailers that can be used to transport a wide range of materials and machinery! Low low height and soft ride full track suspension enable quiet and stable towing, even while empty.

Designed with a range of professional trades in mind, these trailers are ideal for just about anybody wanting to move loads too large or unsuitable for their vehicle or for those that don’t want to risk damaging their property. 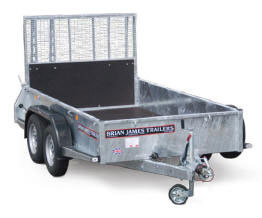 Camping and Baggage Trailers for Hire 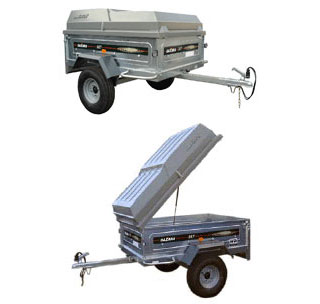 Most of us have at some point had a situation where our vehicle is just not big enough to hold the luggage, equipment, camping gear etc that you need to carry. Alternatively you simply don’t want to scratch and scuff your car.

This trailer comes fitted with a lockable ABS lid. This makes it very popular for those who are looking to transport goods around that need to be kept safe, secure and out of the elements.

If you’re looking for a way to transport your motorcycle(s) without having to ride them then this is the clear solution.

This Erde CH751 trailer can transport one, two or three motorcycles with ease. We also provide one loading ramp and six tie-down straps

Complete with winch & tie down straps.

With no towbar fitted a quick option to extend the capacity of your vehicle is to add a roof box. Boxes feature a key lock for security. support stays support the lid in the open position to allow easy access, folding neatly inside when closed. Box lid opens from either side. It will simply clamp onto the existing vehicle roof bars.

If you are not sure if your Driving Licence allows you to tow, please click here

Most drivers who passed their test before 1 January 1997 have licence categories B+E allowing them to drive a vehicle and trailer with a combined weight of up to 7 tonnes. The trailer must not exceed 3.5 tonnes.

Drivers who passed their test since 1 January 1997 are only allowed to drive a vehicle up to 3.5 tonnes (category B) and tow an unbraked trailer up to 750kg. Drivers may tow larger trailers over 750kg if the combined maximum authorised mass (MAM) does not exceed 3.5 tonnes and the gross MAM of the trailer does not exceed the unladen weight of the towing vehicle. To be able to tow combinations outside this ruling requires the passing of an additional test to obtain Categories B+E.

Drivers who passed their test after 19 January 2013, category B (car and small vehicle) can tow small trailers weighing no more than 750kg, a trailer over 750kg as long as the combined weight of the trailer and towing vehicle is no more than 3,500kg Maximum Authorised Mass (MAM)
If you want to tow a trailer weighing more than 750kg, when the combined weight of the towing vehicle and trailer is more than 3,500kg, you’ll have to pass a further test and get B+E entitlement on your licence (please see the latest information about this below)

This information is not a definitive statement of law.

Please refer to your individual drivers’ license to confirm your personal entitlement and seek advice from the DVLA and the professional bodies where necessary.

Latest Update:
To make more HGV tests available, DVSA have not been carrying out any car and trailer tests since 20th September 2021. It is therefore no longer possible to book one of these tests.

The current licence requirements for cars towing a trailer still apply until the new legislation receives Royal Assent, which we expect will be as soon as possible, although the EU are not happy with this change so it might be some time until it becomes law.

All car drivers who have passed their driving test after 1 January 1997 can tow a trailer up to 3,500kg in weight. Your photocard driving licence may not state this at the moment but the DVLA will have updated your driving licence records to reflect the changes. You don’t need to contact DVLA for this – it will be done automatically. The car and trailer category will be added to your photo card driving licence when you apply for a new licence.

Car drivers who passed their test before January 1997 will already have this category on their licence and can also tow a trailer or caravan up to 3,500kg gross.

This information is not a definitive statement of law.

Please refer to your individual drivers’ license to confirm your personal entitlement and seek advice from the DVLA and the professional bodies where necessary.